Mapping
Three Rivers Mosquito and Vector Control uses state-of-the-art software and hardware to implement our mapping efforts in-house. TRMVC can provide you with high quality mapping and GIS products in a timely manner.  Our staff who are proficient with ArcGIS utilize ArcGIS Pro and ArcGIS Online.  TRMVC also utilized Drones for aerial photography and to help staff locate hard-to-find sources. 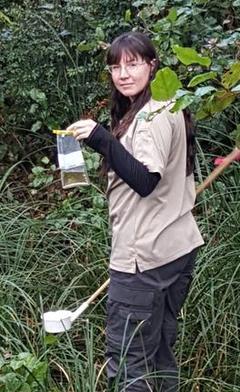 With this detailed surveillance data, TRMVC is able to design and implement a customized and scientifically proven Integrated Mosquito Management plan, including when, where, and how often larvicides and adulticides need to be applied.

In addition to standard mosquito surveillance, surveillance for mosquito-borne diseases provides essential information to protect citizens. Wild birds, sentinel flocks, and mosquito pools can give early warnings of potential outbreaks. We have the ability to test mosquito pools for WNV with RAMP bioassays which provides identification of WNV-infected mosquito pools within 12 hours for increased response capability.

TRMVC's staff has worldwide experience in all aspects of mosquito and other vector surveillance and control, with projects in Africa, the Middle East and Asia.

TRMVC uses the most up-to-date truck-mounted Ultra-Low Volume (ULV) application equipment. All vehicles are equipped with GPS tracking units capable of delineating the spray routes of each vehicle. These units record at one (1) second intervals the date, time, latitude, longitude, and sprayer status (on or off) for each vehicle.  Detailed maps, graphically illustrating the application data can be produced after each spray operation and provided to the client.  This provides accountability for supervisors and our client.

Hand-held and ATV-mounted adulticide equipment can be used to supplement truck-mounted equipment. Service requests, golf courses, parks, recreation areas, and special events can be handled with this equipment.

Source Reduction
Large scale drainage projects are important in reducing mosquito habitat. TRMVC is the only private mosquito and vector control company in the United States that incorporates drainage and source reduction projects; we will work closely with local agencies in identifying drainage problems. TRMVC has the ability to apply herbicides to roadside ditches, which helps both drainage and evaporation to reduce mosquito habitat. TRMVC also conducts neighborhood source reduction campaigns. Our inspectors often conduct house-to-house inspections as needed to reduce the production of urban mosquitoes (Aedes albopictus and Culex quinquefasciatus) and educate homeowners to identify and remove mosquito production sources to control backyard production.

The most widely used and environmentally sound biological agent is Bti. This larvicide became commercially available in 1978 and has become the larvicide of choice by TRMVC. Bti is available in liquid, granular, and time-release formulations and poses little threat of resistance development.  TMVC also used Bacillus sphaericus (Bs) for a wide variety of control situations.  Bs is a

When mosquito larvae are detected in an area, they are preferentially controlled through the application of Bti. Dependent upon the conditions present, granular, liquid or time-release Bti formulations can be applied.

Although few of the biological control agents occurring in nature are available for mosquito control, the introduction and replenishment of Gambusia affinis (the Western Mosquito Fish) affords good control in pools, ponds, ditches, and drainage canals.

TRMVC is currently working to improve the biological control aspects of our operations.  Copepods are being experimented with to determine the efficacy and feasibility to use as a biological control measure for immature mosquitoes.

Chemical Control of Larval Mosquitoes
Chemical control of larval mosquitoes is carried out when and where biological control is not feasible. Altosid, an insect growth regulator (IGR), can be used in any mosquito-producing area where extended control is desired. These areas can be treated on a 45-150 day schedule once positive production is found. Control of mosquitoes found in tire piles throughout a municipality can be treated at 30-day intervals using Altosid. Any use of non-biological larvicides is closely monitored and mosquito species exposed are tested annually for any evidence of resistance. Chemical larvicides can be used in briquette, granular, and liquid forms depending upon treatment needs and habitat type.

Larviciding can be conducted using a variety of equipment and methods. Back Pack Applicators and Spreaders can be used where vehicle access is unavailable. Tire piles, swales, retention ponds, backyards, etc. can be treated with this type of equipment. Power Sprayers and Spreaders are mounted on All Terrain Vehicles (ATV) or trucks. The holding tanks hold from 15 to 100 gallons of larvicide. These mechanisms can be used with all types of larvicide and in most habitat types, such as ditches, swales, septic ditches, etc. Parks, golf courses, and ball fields can be treated quickly when surveillance indicates the presence of mosquito larvae.

​TRMVC has implemented aerial operation into our scope of services and our staff is licensed in accordance with the FAA Part 107 certification.  Currently, aerial photography and mapping is available.  Thermal imagery will support our surveillance activities while larval control is currently being offered through the use of small Unmanned Aircraft.

While airplane and helicopter applications of pesticides is a great way to apply pesticides to large areas, TRMVC has implemented the use of drones to apply pesticides.  The use of small unmanned Aircraft is an effective and efficient way to treat hard to reach areas, while also being much more safe than traditional manned aircraft.

Chemical control of adult mosquitoes is used whenever and wherever staff has determined mosquito populations have reached unacceptable levels. Surveillance, source reduction, larviciding, and public education should all be used to reduce the amount, frequency, and areas that adulticides are needed. However, the end result of organized vector management is often the use of adulticides. Chemical adulticides should be as safe and as environmentally friendly as possible. Additionally, caution and resistance management should be used to avoid developing resistance to pesticides in local mosquito populations. TRMVC uses only EPA and locally registered public health pesticides labeled for mosquito control such as natural pyrethrin and permethrin.​