Every so often, well-intentioned environmental groups promote bats to eliminate mosquitoes from areas where mosquitoes have become unbearable. This certainly leads to rekindling of research performed in the 1950s demonstrating that bats released in a room filled with mosquitoes could catch up to 10 mosquitoes per minute.  The research was performed to measure the effectiveness of bat species to control mosquitoes. The results have been generalized to suggest that bats can consume 600 mosquitoes per hour. Using this calculation, a colony of 500 bats would remove 250,000 mosquitoes each hour and hypothetically allow mosquito control for an entire community.  Research since that time has shown that bats are opportunistic feeders and that mosquitoes make up a very small fraction of their natural diet.  Bats’ behavior when locked in a room with nothing to feed upon but mosquitoes has no bearing on their behavior in the wild.  Bats feed on the same insects that turn up in bug zappers and are no more effective for controlling mosquitoes than their electronic equivalent. Providing habitat to enhance bat populations is an admirable activity for conservation purposes.  Using mosquito control as the reason to initiate public interest is misleading at best.

HOW DO MOSQUITOES SPREAD DISEASE?

Mosquitoes spread diseases when they "bite" their victims.  Although it's commonly referred to as a bite, the actual process is a piercing/sucking action.  Only the female mosquito bites, piercing her victim's skin with a structure similar to a long, sharp-ended straw.  She must suck her victim's blood up through the shaft; but the blood is thick.  To

make the blood easier to draw, she injects her saliva (which contains blood thinners) into it.  This saliva is what causes irritation and itch. If her victim's blood contains disease-causing organisms, they too get drawn up into the mosquito's stomach.  The organisms are maintained within the mosquito and eventually injected into the next victim's bloodstream.  In this way the mosquito can spread disease from animal to animal, animal to man, or from one person to another.

Why Do Mosquito Bites Itch?

Where Do Mosquitoes Go in Winter? 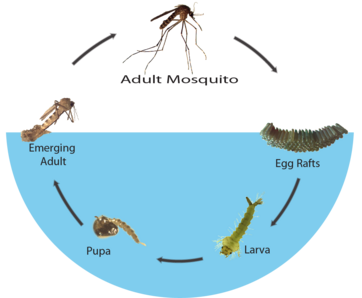 WHY DO WE NEED MOSQUITO CONTROL?
A) To prevent disease transmission.  Worldwide, no other organism is responsible for more human death than the mosquito. One mil lion people die annually from mosquito-transmitted diseases, of which West Nile virus and Encephalitis affect the U.S. population the most.

B) To improve the quality of life. In many parts of the country, summers are very short. It makes sense to minimize the nuisance pests so we can maximize the enjoyment of our outdoor activities.

C) To improve the profit conditions of income producing businesses which may be impacted by high mosquito populations.