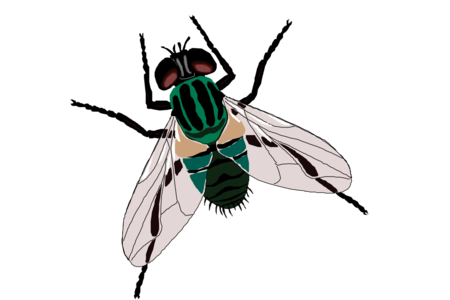 The most important feature of successful house fly control is the reduction and elimination of fly breeding sites. This may be accomplished with proper garbage disposal and pickup as well as general cleanliness. Adequate screening on doors will help keep fly numbers in the house at a low level. Insecticide treatments are effective in reducing fly populations. Space and residual sprays for prolonged effectiveness applied to surfaces which flies frequent, are commonly used control methods. Also used are baits (Golden Malrin and Quickstrike) and resin strips, which can be hung in the home. For control of house flies, as well as horse flies, and other related biting flies in cattle and dairy situations, several parasitic insects have also been employed.

TRMVC can implement a fly control program for your home, ranch or business, implementing an IPM program to reduce the flies, and make your environment healthier.   Contact us for more information.

Flies are important because of their close association with man and his structures; their feeding on both contaminated and non-contaminated foodstuffs; their dispersal ability; and the constant alternate feeding on feces and food. The house fly breeds in many materials such as animal excrement, decaying lawn clippings, garbage, rotting vegetable and fruit material, and other decomposing organic matter. They are extremely annoying in large numbers by their repeated landing on people and food items. Although over 100 disease organisms have been isolated from house flies, it is difficult to definitely prove that they are responsible for transmitting these diseases.

Flies have been known to be the causative agents for food poisoning, dysentery, cholera, tularemia, and typhoid fever. Many other diseases have been found on these pests.

The house fly, Musca domestica, is found everywhere that humans exists and has adapted itself to our environment.  It is found throughout most of the west Coast.

Description and Life Cycle: The house fly is a small gray insect between 1/4 to 3/8 inches in length, with longitudinal stripes on the back. The body is dull colored in contrast to the shiny blow flies which have similar habits.  Males and females are similar in appearance. The mouth-parts of the house fly act like a sponge to lap up liquid nourishment; thus the house fly does not bite. The cream-colored immature larvae, or maggot, is round and slender and tapers towards the head. The pupal stage is spent in a small brown capsule-shaped structure which is the hardened skin of the final larval stage.

Female house flies can lay 75 to 150 eggs at a time, and after hatching, the maggots feed and grow rapidly, pupating and emerging as adult flies in as little as a week. There may be as many as a dozen generations during the summer months.