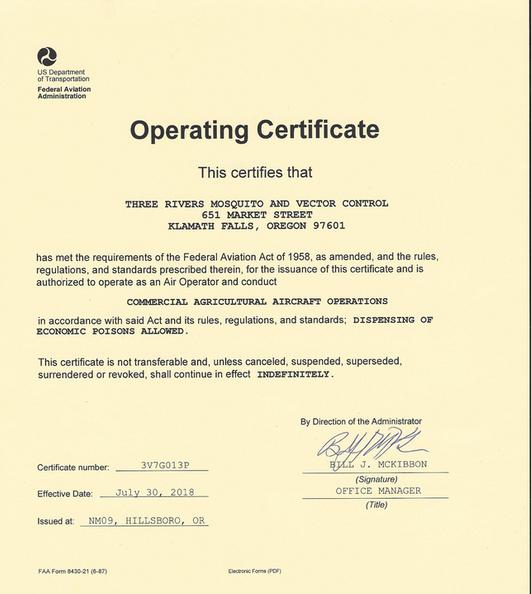 Staff is licensed IAW FAA Part 107 and uses sUAVs for aerial photography, to locate mosquito sources.  We also maintain an FAA Part 137, with the intent to utilize drones to larvicide sources currently inaccessible, in order to reduce the need for adulticide fogging.  As of July 2018, Three Rivers Mosquito & Vector Control was the first company in the Pacific Northwest to be authorized by the FAA to conduct mosquito control liquid and granular spraying missions, with a small unmanned aircraft.

During the summer of 2018, TRMVC staff was licensed by the Washington State Department of Agriculture to apply pesticides with a small UAV.

As of December 31st, 2018, TRMVC became licensed by the Oregon Department of Agriculture, to apply larvicides with a small UAV.

We currently are certified and licensed to operate in Washingtonand Oregon.